skip to main | skip to sidebar

The Cambodian leg of the trip has been sponsored by the Cambodian Support Group, a charitable organization headed up by Victorian musician Arne Saalinen.

Today is all about seeing some of the work the CSG is accomplishing and just how badly off a lot of Cambodians have it... so, I'm expecting it to be a depressing but eye-opening day.

Stop #1 is KAVTV (I don't know what the initials stand other than the K is presumably Khmer, the Cambodians' name for themselves)... a vocational school for handicapped Khmer that teaches them basic electronics repair skills. A lot of their funding comes from the CSG. It's a very small space, with living quarters upstairs. 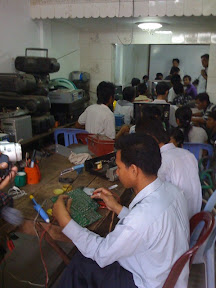 Next was a visit to the Royal University of Fine Arts, but we arrived earlier than they were expecting, so we sat around twiddling our thumbs (and working on our jourals/blogs) for an hour or so, then they fed us (simple fried rice but it really hit the spot for me).

I went another round with one of those stupid Squatty Potties as I've started calling them... I won but not without casualties... when I return home I fully intend on hugging my toilet, I hope it's clean!

The students at the school put on a short informal performance for us & we returned the favour, then headed out to the Phnom Penh City Dump (!) where we were going to meet some children who make their living by scrounging at the dump (including finding food, eww).

The drive there was an adventure, especially in some areas with very low hanging power lines, our Khmer hosts jumping out of the bus in order to hold up the power lines with sticks so the bus could fit under. 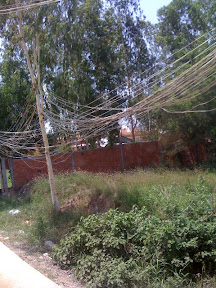 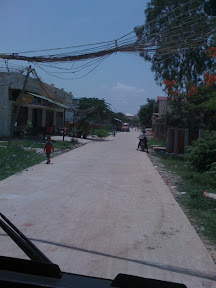 Arriving at the dump, and half convinced we'd be leaving our poor abused bus behind, we found that the children we were to meet were smarter than us and had left the dump for the day due to the heat. 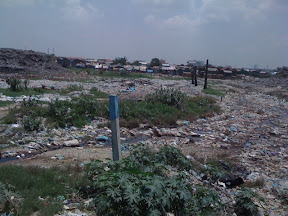 We did manage to find some other kids on our way out, good day for them as a number of our group had soap, toothbrushes and toy soap bubbles and were happy to find someone to give them to. 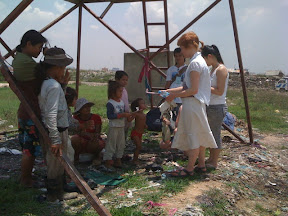 From here we went into more pleasant duties... SHOPPING! We were taken to the Russian Market, so named because it's where the Russians shopped when they ran things (Did they ever occupy Cambodia? It's what we were told, but a number of us don't remember reading that in the history books, will have to Google that when I get near the internet again).

I bought some uniquely Cambodian things which I hope Mick & Steve will like, plus a cheap carry-on suitcase to take it home in (whaddya mean cheap, it was $20!).

Then on to Chaktomok Theatre, which was very lovely, but we went straight into rehearsal so I had no time to take pix.

It's now 5:30pm and having returned to the hotel and showered, Rick & I Re just kicking back and enjoying the air conditioning.

I'll be heading out soon to investigate getting a traditional Khmer tattoo (using old-fashioned hammer/chisel type tools, not a modern tattoo rig), if I can verify the hygiene, I'll be sporting some new ink when I return.

That's about it for now, I also hope to hit an internet cafe later to post some of this and maybe even contact Mick & Steve.

Well, struck out for now on the tattoo, the local shop uses modern equipment, but Chantovouth thinks he knows someone else who might do traditional tats by hand.

Right now I'm sitting with some fellow Primates at a restaurant nearby our hotel with free wifi, man it's great to get the blogs caught up! Will email Mick & Steve after this, but it's too early to call now. Signing off for now!