skip to main | skip to sidebar

Well, today started early as I posted in my last entry... very quick busride to Angkor Wat... not just one temple but a whole archeological site.

Had a great time poking around the ruins spread out over three main sites. 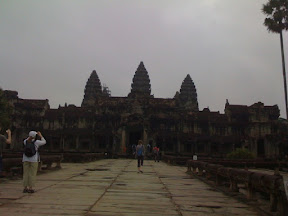 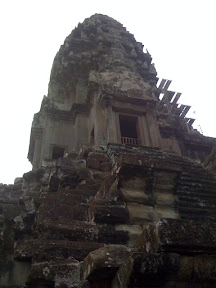 The second site is on a smaller scale, and is being restored by a team of international archeologists. Up on top was a group of women in Cambodian traditional outfits with a fellow offering to take pictures for a small donation. 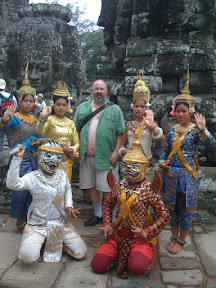 There were also elephants here that one could get rides on going up the hill to another temple which is a popular place to watch the sun set. 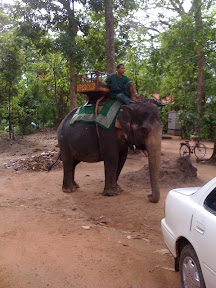 The highlight of this first outing of the day was the third ruins which were not restored but left in their original state. The fascinating thing about this place are the huge trees growing through the ruins, which are in many cases actually supporting the temple. 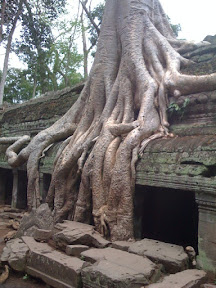 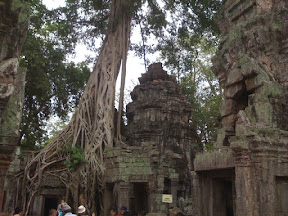 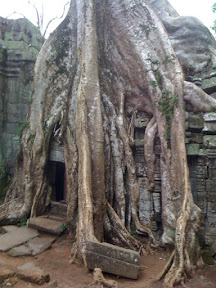 From here we went back to the lodge to clean up and grab some lunch.

There was an optional trip to a silk factory which I skipped in favour of a quiet afternoon.

I phoned Powell River to wish my mom Happy Mother's Day, only to find that she has been admitted to hospital with a severe headache and is being shipped by ambulance tomorrow to Courtenay for a catscan to check if her cancer may have hit the brainstem. Suffice to say it was a difficult afternoon.

At 4:30pm most of us (28 of 40) bussed back to the Angkor Wat site where some walked up the hill the aforementioned sunset temple. With Mom in the hospital I couldn't not go via elephant so I bought a return ticket up the hill. Elephants move with a very rolling gate, so it was very difficult to get a decent picture. 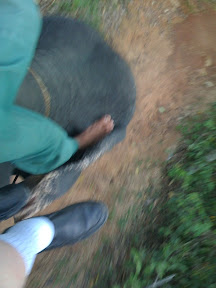 Lovely shot of my foot on an elephant...

At the top of the hill, there were a ton of folks, I guess watching the sun set from that site is a popular thing. We gathered together and shared songs with a choir of Cambodian children, was a very powerful and moving moment.

I rode back downhill on my own elephant (shared with Rick on the way up) which gave me some much needed quiet time to reflect.

On our return to the hotel we were given 15 minutes to change then on the bus for a wrapup dinner for our Cambodian stay. Unfortunately the restaurant wasn't very good so dinner was somewhat anticlimactic.

Back to the lodge, several of our number had been drinking throughout most of the afternoon and were drunk enough to be a nuisance to the rest, and I was tasked with the responsibility of keeping order, oh joy.

I kept things relatively quiet and only had one particularly obnoxious drunk to deal with, then left them to their own devices not long after 11pm, been a long day.